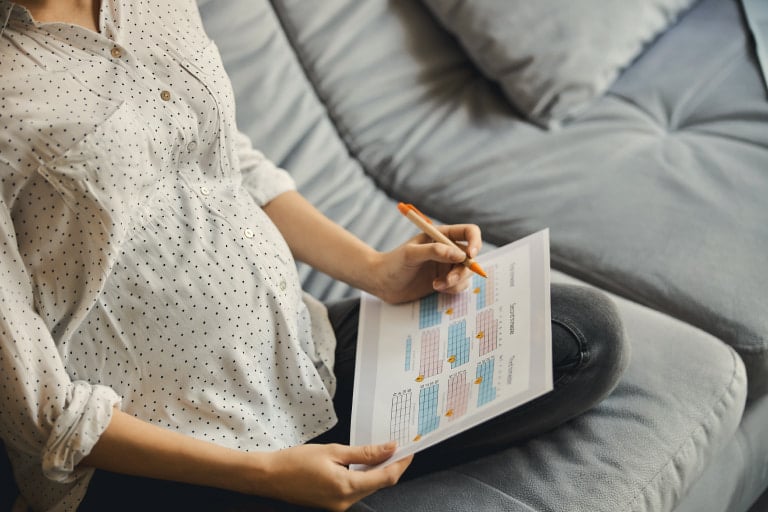 The first trimester of pregnancy covers between weeks 1-13, or the first three calendar months. For at least half of this time, you may not even be aware that you are pregnant.

The first week of pregnancy is included in the first trimester, in the time when you may be having your period, confusing as it sounds. This is because it is seen as a time marker for when ovulation is most likely to have occurred. For most women this is somewhere around 14 days from the first day of their last period, though the time varies depending on the length of each woman's individual cycle.

Throughout this series and starting with the first trimester, we will talk about gestational age because most of the information around pregnancy does this as well.

How you may feel

By the end of the first trimester most women have had their pregnancy confirmed. If you haven’t made an appointment to see a pregnancy care provider, make sure you check it off on your to do checklist. Some of the earliest signs of pregnancy have already been discussed (Check week 6) but here are some others:

How you may look

At 12 weeks your uterus will be starting to lift out of your pelvis and a small bump may be visible in your lower tummy. This won’t be obvious to others, though you may start to show earlier if you have had a baby before. Your breasts may increase a lot in the first trimester and look bigger than they normally do. Be prepared to buy new bras in a larger size.

Let’s look at each of the 13 weeks in the first trimester in more detail and what you can expect.

Conception usually happens in the fallopian tube and although it is, by any standards, a significant moment, there will be no outward signs that fertilization has happened. Generally, it takes around 6-12 days for the fertilized egg to travel down the fallopian tube to the uterus.

Once the fertilized egg has nestled into the wall of the uterus, signals will be sent to your body to produce more estrogen and progesterone. These and other hormones will help sustain the baby throughout your pregnancy. Some women will have a small bleed as the embryo implants into the uterine lining.

The placenta has started to form by now and will play a vital role in producing specific hormones and feeding your baby. By this stage, the embryo is smaller than a grain of rice but each of its cells are already programmed to fulfil a specific function.

It is now that a heartbeat may be seen on an ultrasound and the eyes and ears of the embryo are being formed. Small buds of tissue start appearing on each side and these will eventually become the limbs.

By the time you are six weeks pregnant, the baby can officially be measured via ultrasound even though the average 6-week fetus is typically about ¼ inches!

You are now officially just over halfway through your first trimester. Your baby has grown about 10,000 times bigger than it was when you conceived them. So much of your baby's growth is concentrated on their brain this week—did you know that approximately 100 new brain cells are forming every minute!

By now, your baby is a reaching toward ½ inch long; this officially earns baby the biological designation of fetus. The valves in your baby's heart are present as are the passages that will help air flow from their throat to their lungs. Its fingers, toes and lips, eyelids and legs are becoming more clearly defined.

Right now, the mouth and tongue are starting to form. The hands, which until now have been webbed, will start to separate into fingers. On an ultrasound, your fetus can be seen making tiny movements.

Your baby’s heart is dividing into four chambers and their heartbeat can be heard with an ultrasound Doppler. All of baby's organs have developed and their digestive system is developing.

By now, the fetus’ genitals have clearly formed, but it's still too early to tell on ultrasound whether you will be having a boy or a girl. Tooth buds are also forming, and the eyes are fully developed. Fine hair covers the body, and the facial features are more clearly like those of a baby.

By now, the fetus is fully formed, and all its vital organs and nervous system pathways are functioning. Until now, baby’s bones have been soft but now they start to harden. Your fetus begins to relax from its tight curl and starts to straighten.

Your baby is as cute as a peach this week and around the same size too. Up until this week, their abdominal organs have been forming outside their skin but now they will start moving to where they should be.

For more detailed information about each and every week of your pregnancy, see Pregnancy by Week where we have an article for each week!