Some new parents know right away what they want to name their new child; others refer to books at the bookstore, ask friends, or even turn to pop culture to find a unique and interesting name for their child. Either way, naming your child is one of the most exciting milestones during your pregnancy.

These days, new parents are much more open to using unconventional names to help their children stand out. Disney is one resource parents are turning to find their child’s cute and interesting name. Disney baby boy names and Disney baby girl names have only risen in popularity. Looking for some magical, fairytale inspiration? These Disney-inspired baby names will give your child a magical start in life. 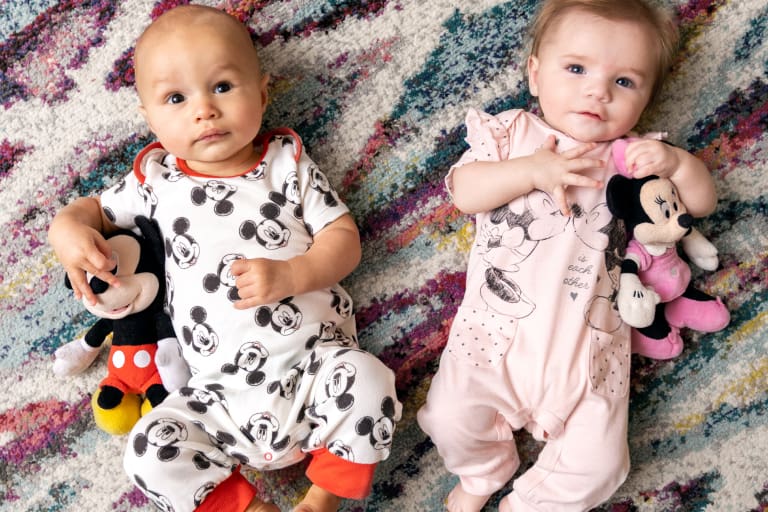 If you want a name that holds a special place in your heart because of a Disney movie you enjoyed growing up, here are some options to consider.

Alice: German by origin, Alice means noble and is derived from the Old German name Adelais. “Alice in Wonderland” is forever a classic film that can inspire your child to explore her curiosity.

Anna: While Anna has always been a popular name, “Frozen” definitely catapulted the name Anna back into the spotlight. Hebrew for “grace,” it has been popular for many centuries. There are many names that have derived from Anna as well, such as the Spanish “Anita,” the Danish “Anja” and the Swedish “Annika. It’s also a popular name for mashups, such as Annabelle, Annabeth, Annamarie, Mariana and Julianna.

Ariel: “The Little Mermaid” is forever sealed in many of our hearts as the ultimate Disney movie, and Ariel the ultimate Disney princess. Hebrew for “the lion of God,” Ariel can be both feminine or masculine. Feminine spellings also include Arielle and Ariella, and men sometimes shorten it to Ari.

Aurora: Princess Aurora from “Sleeping Beauty” awakens from her deep slumber—so it makes sense her name means “dawn” in Latin. Aurora was a Roman goddess, and as the myth goes, she gave birth to the winds and stars. Scientifically, it also can allude to a brilliant display of lights, such as aurora borealis, or the Northern Lights.

Belle: Your baby doesn’t have to have her nose in a book to be named Belle, after the main character in Disney’s “Beauty and the Beast.” Belle means “beautiful” in French, and is also widely seen in other languages as Bella, Isabella, Isabelle, Annabella, Arabella, Elle, and Ella. Belle was an extremely popular name in the 1800’s and is enjoying a resurgence recently thanks to Disney.

Coco: Pixar’s movie “Coco” about a Mexican family has helped the nickname come back. Coco can be a nickname for the French names Colette and Nicole. People also associate it with the French fashion designer Coco Chanel.

Elsa: A form of the name Elizabeth, Elsa has skyrocketed to popularity thanks to “Frozen.” The first recording of the name was in the 15th century, and it was actually the most popular name in Sweden in the years following the release of “Frozen.” Other variants of Elsa include Elsie, Elise, Eliza, Ella and Elle.

Esmeralda: Greek for “green jewel,” Esmerelda is a unique name for a baby girl that comes from Disney’s “The Hunchback of Notre Dame.” In the movie, she stands up for what is right—so naming your child Esmeralda could help shape her character. Nicknames from Esmeralda include Esme, Meri, Rally and Essie.

Giselle: Derived from both French and German, Giselle means “pledge.” While the supermodel Giselle gave the name a boost, Disney fans know it’s really “Enchanted” that has made this name so popular. It can also be spelled as Gisele. Nicknames include Elle and Ellie.

Jasmine: The name Jasmine is Persian and means “flower” or “gift from God”—and is perfect for any adventure-loving girl who has the spirit of Princess Jasmine in “Aladdin.” Alternative spellings include Jazmin, Jazmyn, Yasmin and Yasmine.

Merida: The Latin name Merida is a highly unusual one—fitting for the feisty Scottish Princess Merida in Disney’s “Brave,” and perhaps your baby, too!

Nala: Nala is Simba’s sidekick in “The Lion King,” and the name is of African origin. It can also be spelled Nahla.

Tiana: Tiana is a shortened version of the Russian name Tatiana, and means fairy queen—fitting for your little princess. Tiana was Disney’s first African-American princess. Nicknames from Tiana include Tia and Tiana.

Rapunzel: Long before it became a Disney movie, Rapunzel was a Brothers Grimm fairytale princess locked in her cage. Disney’s “Tangled” helped the name jump in popularity, although it is still an uncommon name. Rapunzel is a type of German flower.

Wendy: “Peter Pan” fans know that Wendy is the little girl—but what you might not know is that the name Wendy was completely made up for the book “Peter Pan.”

Here are some cute and memorable baby boy names inspired by your favorite Disney characters.

Buzz: Whether you want to name your child Buzz or call him that as a nickname, it’s a bold choice for the child boy who is definitely going places...perhaps to infinity, or beyond!

Gaston: You probably missed this as a kid, but Gaston means “foreigner” or “guest” in French—reinforcing that the “Beauty and the Beast” villain is on the outside. Fun fact: It’s also the first name of the author of “Phantom of the Opera,” Gaston Leroux. If you’re into theatre, it’s a double-whammy of a name.

Gus: Who doesn’t have fond memories of Cinderella’s little mouse friend Gus? A nickname for a variety of names such as Angus (Gaelic, meaning one strength), Augustus (Latin, meaning greatness), August (Latin, meaning majestic), or even Octavius (Gus’ full name from “Cinderella”!) Gus is a strong boy name for anyone you hope to be as loyal and helpful as that mighty mouse.

Hans: While Hans isn’t the most beloved character in “Frozen,” the name Hans is a strong name of German and Scandinavian origin. Originally short for Johannes—the English version is John—Hans is now a name in its own right. It means “God is gracious.”

Hudson: Doc Hudson is from Disney and Pixar’s “Cars” (full name: The Fabulous Hudson Hornet). Based off the 1951 Hudson Hornet, Doc Hudson’s ultimate redemption story is part of what makes the movie so heartwarming. The name Hudson Is English and is a conjunction of “Hugh’s son.” It’s also gaining popularity as a girl’s name as well!

Kristoff: Kristoff in Disney’s “Frozen” is Anna’s helping hand, and the name in ancient Greek means “bearing Christ.” It’s very popular in Scandinavian countries as well and the name is similar to the Greek Christopher. While Christopher is a very popular name, Kristoff is less so in English speaking countries, giving your baby boy a reason to stand out.

Luca: Pixar’s movie “Luca” is set in Italy and is the perfect elebration of an Italian summer—minus the sea monsters, of course. Luca means “bringer of light” and is the Italian version of Lucas. Other variations include Luke, Luka, Luc, Lukas and even Luki.

Maui: Maui is a bold character in Disney’s “Moana,” so give your child this name if you want someone strong and who is kind of a good-natured trickster like the character, who is named after the Polynesian god Maui.

Maximus: The fearless horse Maximus in “Tangled” is rightfully named, as Maximus means “greatest” in Latin. Originally a Latin title of honor, it has since evolved into its own name. Variations include Max and Maxwell.

Michael: It might seem odd to have such a classic name like Michael on this list, but throughout Disney, there are several Michaels of note–such as Michael Darling in “Peter Pan” and everyone’s favorite monster, Mike Wazowski, from “Monsters Inc.” Variations include Micah and, of course, Mickey.

Nemo: Pixar most likely based the character of Nemo off of Captain Nemo from “Twenty Thousand Leagues Under the Sea,” the popular book by Jules Verne that was turned into a classic Disney film.

Peter: Peter Pan is probably the second most famous Peter, only to St. Peter. Peter means “rock” or “stone” in Greek, and is a strong, durable name. It is derived from the name Petros, and popular names related to Peter include Piers, Pierce, Pearce, Pietro, Pedro and Pierre.

Remy: There are several interpretations of the name Remy. It can mean “oarsman” or boater, or a person from Rheims, a city in France. The name skyrocketed to popularity after Remy the gourmet chef – who happens to be a rat – made his debut in “Ratatouille.” It is also popular for girls, sometimes with the spelling Remi. It can also be a nickname for Jeremy!

Sebastian: Have a crabby baby? Consider naming him Sebastian. All jokes aside, Sebastian is a popular name thanks to “The Little Mermaid,” with its origins going back to Greek and Latin. It means “majestic,” and many celebrities have paid homage to the little red crab by naming their sons Sebastian. Popular nicknames include Seb and Sebbie.

Woody: Woody is often thought of as a nickname for Woodrow, In “Toy Story,” Woody is a cowboy sheriff with a pull-string, and he’s a dependable leader who ensures that no friend gets left behind. All of which would be great traits for your child as well!