Linea nigra is a Latin term which quite literally means “black line.” This is a good way to describe the dark vertical line which so often appears on the abdomen of pregnant women.

It's estimated that around 75%, of pregnant women will experience some degree of linea nigra.

Depending on the individual woman and her skin, linea nigra can be quite light and barely visible, while for others it can be much darker than the surrounding skin and stand out much more clearly. 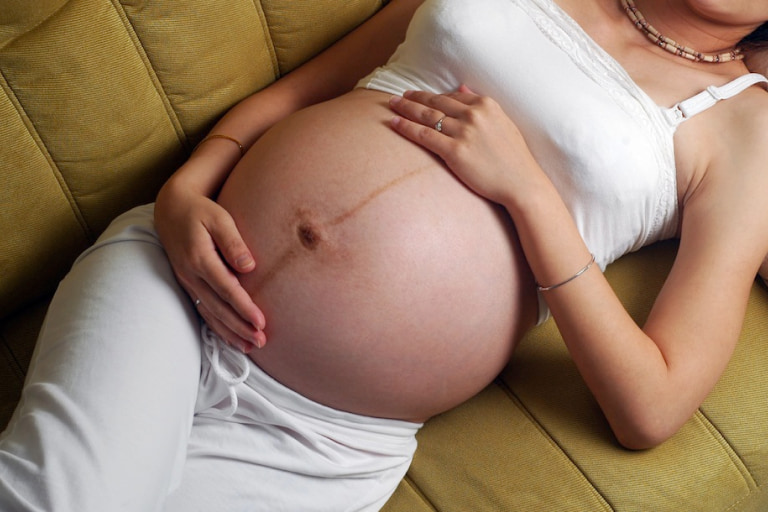 It may be a slight shade of brown or a darker pigment of brown to almost black. It is generally around one quarter inch wide or less and the same width along its entire length. It most commonly appears from the umbilicus (aka your belly button) and runs straight down to the pubic bone. It can also run vertically from the umbilicus to almost level with the ribcage, and, occasionally, up between the breasts.

Linea nigra tends to form during the second and third trimesters of pregnancy. It starts off around the fourth or fifth month of pregnancy as a very fine line and then slowly expands and becomes darker. As the abdomen enlarges the width and intensity of linea nigra also expands.

Linea nigra formation is due to an increase in the hormone which causes skin cells to become dark. During pregnancy, high levels of estrogen have an effect on the melanocyte-stimulating hormone, manufactured by the placenta.

Linea nigra might always have been present; it's just that until the influence of melanocyte- stimulating hormones came into play, it wasn’t nearly as visible. Linea alba (“white line”) is the term for the line which changes into linea nigra because of becoming darker.

As the abdominal muscles stretch and separate, linea nigra tends to form. The line created is certainly more prominent in some women than others. It marks the midway point between the left and right abdominal muscles. These abdominal muscles need to separate to allow the pregnant abdomen to grow. Some people believe it is the relative thinness of the skin which is the cause.

The hormonal effect of increased melanin production is also responsible for many other skin changes during pregnancy. Examples include nipples, moles, birthmarks, and freckles appearing darker. Even scar tissue can begin to appear darker and more obvious than before.

Chloasma, otherwise known as the mask of pregnancy or butterfly mask, happens across the face and cheekbones. It is also caused by this rise in melanocyte stimulating hormone.

Will linea nigra harm me or my baby?

No, it will not harm you or your growing baby. Linea nigra is considered wholly cosmetic and the only negative issue of having it is that some women consider it to be unsightly. It is one of the many minor issues which arise during pregnancy and, for most women, it resolves after their baby is born.

Linea nigra is restricted to external skin cells and does not cause a discoloration or darkening of the uterus or the baby. It is quite literally only skin-deep.

What can I do to prevent linea nigra?

Fair-skinned women are not as prone to developing it, just as they are less likely to tan because of sun exposure. We cannot change the color of our skin, or the changes which occur because of pregnancy hormones.

Some women find that if their skin is exposed to the sun, it becomes more noticeable. However, if their skin tends to tan, the surrounding skin becomes darker as well.

What treatment is recommended for linea nigra?

There is no specific treatment which is recommended or generally warranted. Most women find that it settles and becomes progressively less obvious within the first few months of their baby's birth. This fading is gradual, and over time there is a steady lightening.

For those women who are having their first baby, the appearance of linea nigra can come as quite a shock. It can just about disappear after pregnancy but emerge again with subsequent pregnancies.

Can I bleach my skin?

Bleaching creams are not recommended. Although some may claim to work miracles, the fact is that most don’t. The compound contained in many bleaching products is known as hydroquinone, a form of chemical which is an inhibitor for melanin production. Products containing hydroquinone have not been assessed as safe to use during pregnancy or lactation.

If you are interested in trying a skin care product which is designed to lighten skin, then speak with your provider and or a pharmacist about what they recommend and what has been assessed as being safe to use. Some creams contain topical retinol which, in the correct concentration, can deliver lightening effects.

A natural alternative may be lemon juice. However, its effects are variable and can cause skin irritation and burning if not diluted with water.

Some women like to rub emollient creams or oils into their tummy, believing this will help reduce the likelihood of it developing. There is no evidence to support this theory. Using creams and lotions on the abdomen can help pregnant women believe that they are making an effort, no matter how negligible the benefits. There is no harm in doing this.

What your linea nigra is telling you

If you believe in old wives’ tales, then your linea nigra could be telling you something! The myth is that, if it extends from your navel downwards towards your pubic bone, then you're more likely to have a girl. However, if your linea nigra is heading north—from your navel up towards your head—then you are more likely to have a boy.

Just remember that the statistics of having either a boy or a girl are around 50%. The odds are high that your interpretation will be right whichever way you look at your linea nigra.