The Dos And Donts Of Prenatal Eating

Step Away from the Donut: The Do's and Don'ts of Prenatal Eating 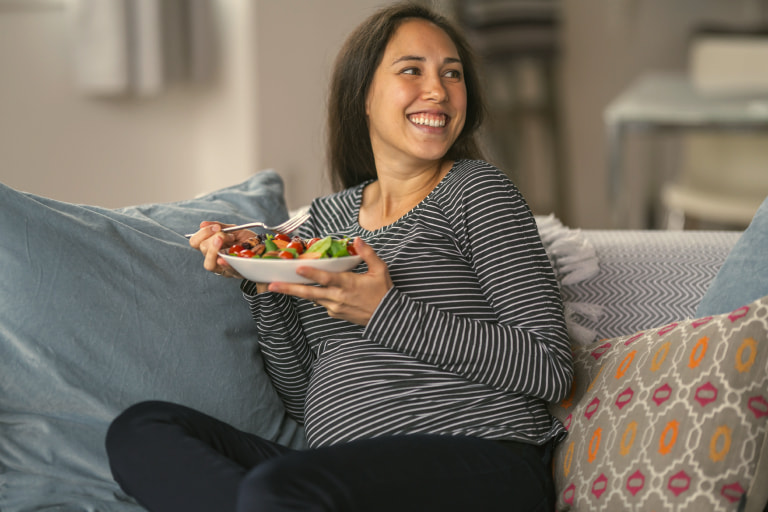 I am someone who really enjoys food. When I became pregnant for the first time, I couldn't wait to experience all the possible cravings, and wondered what they would be. Would I make my husband run out to the store at 10 p.m. because I had to have sugary cereal? Or sardines? Having always been a healthy eater, I was curious to see how my body would react: maybe broccoli cravings?

For all three of my pregnancies, the nutritional intake of my first trimester consisted almost solely of straight carbs - pretzels, crackers, dry cereal and the occasional piece of fruit or bowl of salad. Nothing else appealed to me. For someone who loves to eat (have I mentioned that?), those first three months were not fun.

Fast forward to the second trimester and, after saying bye-bye to the morning sickness and queasiness, I was back to my normal way of eating. My philosophy during each pregnancy was to ensure I was getting the right nutrients by eating a variety of foods, and always being mindful that whatever I ate, my baby ate. That definitely helped me stay on a healthful track and consume lots of fruits and vegetables, proteins and, of course, my tried-and-true carbs.

But of course, I allowed for indulgences. Because ice cream every night just meant that the baby was getting a lot of calcium, right?

I kept waiting for those run-out-to-the-store cravings to hit, but unfortunately, they never really did. I can recall once during the first pregnancy, having a really strong desire for pasta, so my husband and I went to an Italian restaurant and I ordered a huge plate of spaghetti. It was so worth the massive indigestion I had that night.

With my second and third pregnancies, the only thing I really ever craved was ice cream. It certainly didn't hurt that both third trimesters were in the summer, so copious amounts were definitely warranted. Again, more dairy for the baby.

Although I probably had enough ice cream to feed a small country over the course of all my pregnancies, I was also cognizant of the fact that the more I indulged, the more ice cream weight would stick around long after the baby was out. That also helped keep me on track a little bit.

When you're pregnant, eat the best you possibly can and make sure you're eating a wide variety of nutritious foods. But - and I am speaking from experience - a little ice cream never hurt anyone. After all, you are eating for two.