Moms-to-be can crave some of the most unusual foods and food combinations during pregnancy. Check out what these moms loved to snack on while waiting for their babies to arrive.

Many moms have stories about unusual foods they craved during pregnancy — from the stereotypical pickles and ice cream to ice cubes to super-tart lemonade. The stories are as varied as the women who experienced them. Here’s a look at what some expectant moms craved most during their pregnancies. 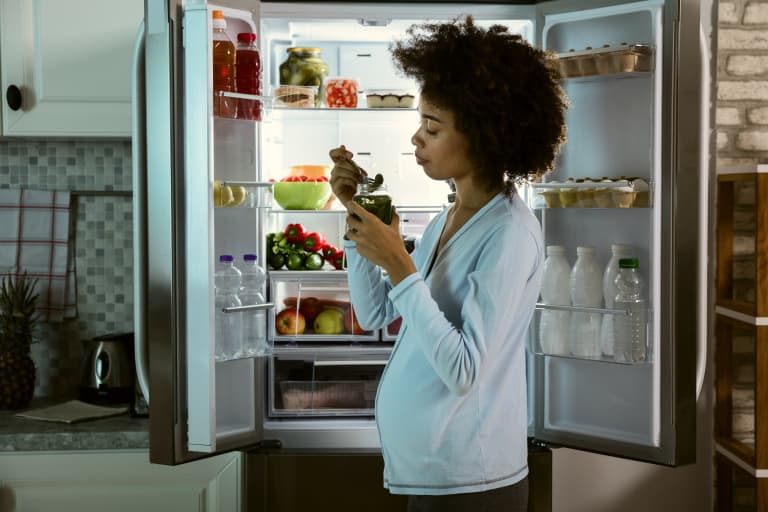 Tamecca Tillard, a Brooklyn, New York, mother of two boys, inherited her mother’s cravings for mango. “My mom's preference was green mangos; mine was ripe mangos,” Tillard says. “I also got really into ice and seltzers in my second pregnancy. I have not been able to kick the ice since the birth of my last son, Barack.”

Tillard also shares that her mom craved chocolate when she was in utero. “This craving became part of my ‘creation’ story because I have a large birthmark that starts on my shoulder and descends down my right arm.”

“I had a craving for fresh pineapple, not canned,” shares Anna Gamel, mom to a boy and a girl in Meridian, Idaho. Toward the end of my pregnancy, I asked for it on the side at restaurants, cooked it into all my meals or put it on the side for breakfast, lunch and dinner, and I even started dipping it in melted chocolate for a daily dessert. I would even choose restaurants based on their pineapple availability.”

“I craved french fries dipped in root beer during my third trimester,” confides Cori Magnotta, a Portland, Connecticut-based mother of one who’s currently planning for baby No. 2. “My son is now almost 2 and goes crazy when he occasionally gets to have french fries as a treat,” she adds.

“When I was pregnant with my older son, I craved a very particular thing: mustard-flavored pretzels,” says Jennifer Reich, a Hellertown, Pennsylvania, mother of two boys. “I normally don’t like them, but I loved them when I was pregnant.” Reich started craving them again 21 months later — and suspected correctly that another baby was on the way.

Kelli Eason Brignac from Lake Charles, Louisiana, who just gave birth to a girl in November, shares: “Early in my pregnancy I was pretty sick and was eating crackers and macaroni and cheese. Somehow that led to me having a thing for nacho cheese . . . like the melty cheese that comes in a jar or is served at Mexican restaurants.”

“One day we were out of crackers, chips and all other crunchy items while I was hunting for something to dip in my cheese,” Eason Brignac says. “I had also recently developed a stereotypical taste for pickles. So I dipped my dill pickle spears in nacho cheese — and it was delicious! My husband and all my friends thought it was disgusting and made no sense. But I ate that for probably the first six months of my pregnancy and loved every bite.”