Identical Triplets: How it Happens and How to Cope

Although it may seem to be almost impossible, conceiving with identical triplets, while quite rare, is actually possible. There is no one consistent statistic quoted when it comes to the odds of having identical triplets. But the generally agreed upon figures are in the vicinity of between one in 60,000 to one in 200 million pregnancies. There is no consensus on the likelihood and even the experts cannot agree. This may be because there is thought to be a natural attrition to the numbers of identical triplets who continue to develop towards birth. Alternately, the true figures just cannot be accounted for. 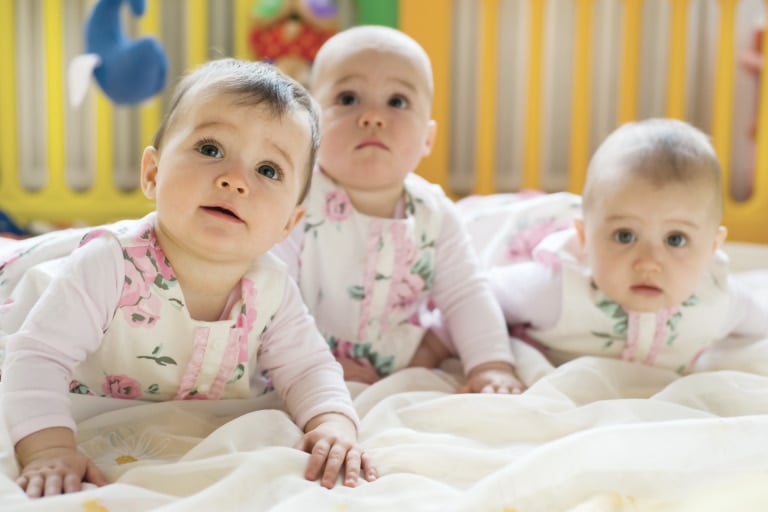 The odds of having identical triplets

How are identical triplets formed?

The majority of triplets are what is known as trizygotic. They are formed when 3 separate, individual eggs are fertilized by 3 separate sperm. These babies share the same characteristics as any other siblings with the same biological parents. They can be the same or opposite genders.

But are all three identical triplets exactly the same?

Another possibility is that the fertilized egg splits into 2 and then one of these eggs divides again. These are what are known formally as monozygotic triplets. This splitting occurs shortly after fertilization and before a woman even suspects she is pregnant. There is nothing she or her partner can do to influence the likelihood of this occurring. It is pure biological luck.

Even taking fertility hormones such as Clomid will not influence the likelihood of conceiving with identical triplets. Although artificial hormones do increase the number of eggs matured to ovulation each month, Clomid does not cause splitting of the fertilized egg after fertilization.

Although it is extremely unlikely, it is still possible for identical triplets to occur after single embryo transfer which occurs during fertility assistance. This did happen to one woman in 2008 who was undertaking fertility treatment. This was the first recorded event. One single embryo split after being returned to her uterus and then divided 3 times, resulting in 3 identical boys.

When identical triplets are formed this means that all 3 share the same identical DNA, gender, characteristics and features. Some researchers believe that a certain percentage of monozygotic triplets actually start as identical quadruplets but one of the embryos does not continue to grow to maturity or becomes reabsorbed.

How would I know if I’m having identical triplets?

You wouldn’t in the early stages of your pregnancy. But you could suspect you are having a multiple pregnancy because of your exaggerated pregnancy symptoms. Extreme nausea, having an obviously pregnant belly much earlier than expected, or being unable to hold even the smallest volume of urine in your bladder may all raise your suspicions.

Triplet pregnancy is confirmed by ultrasound and this can be done in the first trimester of pregnancy, based on pregnancy symptoms. It may not be clear in the very early stages of pregnancy if the triplets are identical or not. If they share a placenta, this is a strong and definitive sign that they are identical. However, it can be very difficult to determine via ultrasound the exact placental structure. Separate placentas can also fuse making them appear to be one.

When a triplet pregnancy is confirmed, it is standard obstetric practice for a woman to require more frequent prenatal checks, ultrasounds, lab work, and general health checks. Bed rest may be considered if there is a threat of miscarriage or premature labor. If a mother is pregnant with triplets and she does not have enough home support, she may need to be hospitalized as an enforced form of bed rest. Some women who are pregnant with multiple babies need to spend many months in hospital, especially if they are threatening to miscarry and their pregnancy is at risk.

How can you tell identical triplets apart?

This can be tricky. Even parents of identical triplets say they can get confused about which baby is which. This is why many have developed little tricks to help tell their babies apart and not get them confused with each other.

One of the more popular strategies is to paint one fingernail of each baby with a different color nail polish. Parents also put colored clothing on each, giving each child a specific color. Some parents retain their triplets’ hospital arm bands long after they could be removed and only take them off when they become too tight on their babies’ growing arms.

Each baby is likely to display their own unique and special characteristics from the newborn stage. Parents are often eager to appreciate the individual differences between their 3 babies and see them as separate rather than “the triplets.” With time and maturity, triplets, just like singletons exert their own, unique personalities.

What are the risks to a mother in carrying identical triplets?

Overall, the metabolic stress to her body of carrying triplets is considerable and as the pregnancy advances, the stress and risks increase. There is an increased risk of every pregnancy complication including:

The average pregnancy weight gain with triples is as follows: Any rapid gain or loss of weight is concerning, especially in the third trimester of pregnancy. Monitoring weight is just one way of assessing maternal and fetal wellbeing and should not be considered in isolation of other observations.

What are the risks to the identical triplets?