Having two girls and feeling very well versed in the diaper changing arena, I figured I had this thing down and I didn’t need anything to cover him up. I could change a diaper in seconds, so why waste a washcloth or wipe for that?

A couple of weeks after taking our son home, I was getting good at the diaper changing thing. I didn’t use anything to cover him, just always had the goal in mind to do it as quickly as possible to avoid an accident. Well apparently, I didn’t need to get too confident in my skills, because it didn’t take long before we had our first mishap.

He was only a few months old and I was in the middle of changing his diaper. I must have done it a bit too soon, because as soon as I pulled off that diaper, I had a nice wet mark all over my shirt. It was then that I officially welcomed myself to the “moms of boys” club.

If you can relate to that, check out the funny stories from fellow moms who had diaper changing mishaps! 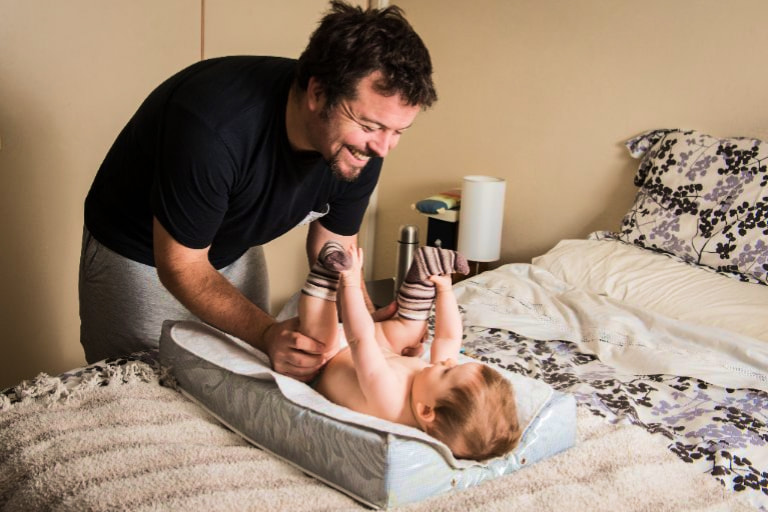 “One morning I changed my infant twin daughter’s diaper only to find out that I put her brother’s size 5 diaper on her in the middle of the night.” – Tracy M.

“[My] husband used a swim diaper instead of an overnight diaper! You can imagine the situation in the morning.” – Jennifer B.

If There’s One Thing You Can Always Count On, It’s Poop

“Our funniest moment happened with our now 6-year-old daughter. She was just a few weeks old when I was changing her diaper on the couch, with my husband complaining at me to not change her there in case she peed. Just after I took the wet diaper off and reached for a wipe, she shot poop out at me like a rocket. My husband quickly scooped her up off the couch, and while he had one hand behind her head/neck and one under her butt, she began peeing. All we could do was laugh as I was wiping the couch off, and there was also now a puddle of pee in his hand and on the floor. It was hilarious. In my defense she didn’t pee on the couch.” – Jennifer W.

“I think our funniest diaper changing moment was when my husband forgot to change my toddler into a swim diaper before putting on her swimsuit! Now if you haven’t ever seen what happens to a regular diaper in the pool, it’s ridiculous! I asked him what was going on down there as her bum was dragging and about 5 times the size! Baby had back, lol! What a mess! We were fishing that gel stuff out of the pool for days!!!!” – Brandy F.

“I was a tad late at popping the diaper on my daughter when she was 3 months. ‘Hey Hun! Girls can pee just as high as boys; our daughter’s already breaking glass ceilings!” I was soaked.” – Beth V.

“With me second son, I decided I wanted to try cloth rather than 3,556 disposable diapers. I bought several (9) and all the inserts as well as the flushable liners. The first day trying them Cash was 6 weeks old, I went to my husband’s family’s shop to take my husband lunch and talk with my in-laws. Mid-conversation with my mother-in-law, we hear a splat! Looking around, we could not figure it out until my toddler yelled, “Mom, Mom! Poo-poo Cash!” I looked down and sure enough, he somehow missed the diaper, his leg, his shorts and my feet with a days worth of yellow infant mess. Needless to say we are selling the cloth diapers. I’ll deal with the 3,556 disposable as long as they keep the poop where it belongs!” – Kari Ann D.

“Shortly after my #2 was born, my husband’s office threw us a small shower. We dropped #1 off with Grandma before hand. At the shower, we had a blowout diaper. That’s when we discovered we left the wrong diaper bag with Grandma, so our nearly 3-year-old had size 1 diapers, and we had size 3 diapers. Duct tape worked really well, and we just won’t tell Chris that he wore big sister’s T-shirt as a dress.” – Heather T.

“Paper towels and Saran Wrap after an explosion and realized we were out of diapers.” – Carrera H.

“Our funniest incident was a couple weeks after bringing our first born home. It was my husband’s night to give a bath, he did so, brought Addison downstairs to me for her final eating before going to bed, when all of a sudden I feel this warm liquid on my stomach! Needless to say, my husband FORGOT the diaper!” – Nicole M.

That’s What Brothers Are For

“The first morning after we brought our second son home from the hospital my husband was changing his diaper while I was sitting in the recliner. My 4-year-old had to be right on top of the changing table watching everything, in awe of his new brother. He was standing at the end of the changing table by his feet, when all of a sudden I see a huge stream of pee-pee shooting up over the changing table and landing right on his head! He even looked up for a second! He just froze arms out dripping, looking terrified. His entire outlook on brotherhood changed that day!” – Stefani W.