Getting babies to sleep can definitely be a bit of a challenge. As I first-time mom, I spent days upon days of my life fretting over how to make sleep happen and worrying about why it wasn’t happening soon enough. With my second baby, I have learned to go with the flow a bit more. I am thankful to have had some perspective this time around, so that when I had those moments of feeling like the sleepless nights were never going to end, I knew that it wasn’t actually true.

But while I’ve realized that babies do start sleeping more eventually, but I’ve also realized that sometimes they need a little bit of help in getting there. Everyone has their own approach when it comes to babies and sleep, but sleep training techniques aside, we found a few things that helped our little one begin to sleep. 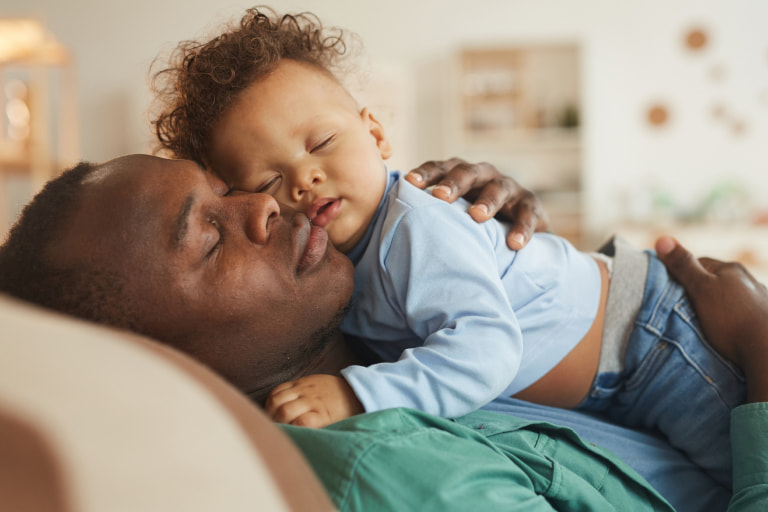 1. Moving to his own room

For a long while, I thought that room sharing was the best option for us to get extra sleep. Since our baby was waking 4-6 times each night to nurse for a good long while, it made sense. Around the time he was 6 months old though, I began realizing that this might have been more out of habit than actual hunger. We moved him to his own room and he ended up sleeping much more soundly – maybe because our noises weren’t waking him anymore!

I cannot say enough good things about having a blackout shade. With the sun staying out longer each evening and rising earlier each morning, our baby had taken to waking with the sun and taking awhile to fall asleep as well. A blackout shade has helped remedy the problem, and we’re getting 1.5 to 2 more hours of sleep each night now — not to mention the fact that nap times are so much easier as well!

I procrastinated using white noise for our baby for quite some time, since he seemed to be able to fall asleep just fine without it. It had become something our older daughter was dependent on until she was nearly three, so I was hoping to keep our sleep routine more minimal this time around. The problem is though, little noises would often wake him and with an older sibling around, sleep disruptions from loud noises occur pretty often. We added white noise to the mix and the sleep has been a lot better ever since.

We had never used a wearable blanket for my daughter, so I didn’t really think to use one for my son, but someone gifted us one and it was brilliant! Not only does it keep our boy cozy and warm, but the mere sight of it serves as a sleep association. He’s so used to it as part of our nightly routine that he starts nodding off almost as soon as I put it on him! This Dumbo one from Disney Baby is a really cute option.

5. Daddy going in to comfort instead of Mommy

Because I nurse, I had always been the one to go in to soothe our little man in the middle of the night. In the past couple of months though, we made the switch so that my husband is now the one to go in and soothe him during middle-of-the-night wake-ups. After a week or so, he was hardly waking up in the night anymore, because he knew that it wasn’t time for a midnight snack. He still wakes up sad occasionally and a quick snuggle from Daddy seems to do the trick quite nicely.

Changing diapers in the middle of the night is a bit of a pain and ever since our boy started eating solids and drinking water in earnest, the diaper changes have been a lot more frequent. Switching to Huggies Overnite diapers made a world of difference. I swore by them with my daughter, and I still think they’re the bee’s knees. No more early morning wake ups just for a diaper change!

Helping your little one find more sleep makes a world of difference on everyone’s outlook. Well-rested parents and babies are happy parents and babies! It may take a bit, but with time and a bit of trial and error you’ll find that sleep together.