Telling Your Kids Theyre Getting a New Sibling

Telling Your Kids They're Getting a New Sibling 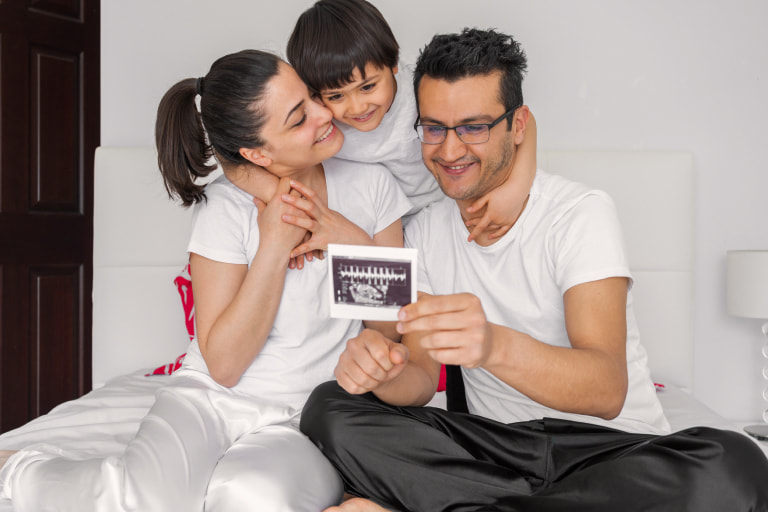 The minute I found out I was pregnant with baby No. 3, I started thinking about how I'd tell my two kids. Because they were older (ages 8 and 5 at the time), I knew they would "get it" much more so than if they were younger, but I was still a little anxious about their initial reactions. We were a happy family of four for so long, how would a new sibling change the dynamic?

My husband and I decided to wait until we knew the pregnancy was routine and normal before telling the kids. Unfortunately, that meant holding off for a few months and getting beyond the first trimester.

I did my best to downplay the morning (in my case afternoon) sickness that hit during weeks seven through 14, and reassure the kids that I was fine, but they thought something was odd. At one point, my daughter said, "Mommy, you've had this stomach bug for a looooong time." I wanted to break the news at that moment, but I needed to make sure everything was fine with the baby first.

I trudged through the weeks and finally hit wonderful week 13, which put me safely into the second trimester. At long last, it was time to tell! We were SO excited and I wanted to plan a little party for the family. The morning of the big reveal, I had a doctor's appointment at the hospital and on my way out, stocked up on "It's a Boy!" and "It's a Girl!" balloons, chocolate cigars, knick-knacks and other small gifts. I also stopped at the grocery store and picked out mini cakes for my kids and had them write, "Big Brother" and "Big Sister" on each.

We took the kids out to dinner that night - a rarity during the school week - and then excitedly brought them home to share the news. I called a family meeting and asked the kids to sit down and my husband started subtly videotaping our "meeting" on his phone.

I started out the conversation with, "So, you know how mommy wasn't feeling well for a while ... any idea why?" Guesses included a stomach bug, I ate something bad and I eat too much salad (clearly, they're not fans of my kale salad).

After a little more beating around the bush, I finally blurted out, "I have a baby in my belly! You're going to be a big brother and big sister!!" The news was met by a split second of silence and then whoops of excitement, jumping up and down and more jumping up and down. The kids were genuinely excited and I think a bit relieved that there was a reason for my two months-long "stomach bug."

We gave them their little gifts and as I would have predicted, my son declared it was a boy and my daughter declared it was a girl. Our little baby party proceeded with us calling other family members with the news, eating cake and imagining what life would be like with a baby in the house. It was a wonderful night that I won't soon forget, and I felt so happy that my kids were so excited.

It seems like just yesterday that we broke the news of the new addition, and here we are today, a family of five. The kids have been nothing short of amazing, welcoming their baby sister into the world, and I often call them "little mommy and daddy" because they love her and care for her as much as my husband and I do.

Telling the kids that they were getting a baby sibling was exciting, but seeing them be the best big brother and big sister I could ever have hoped for is beyond anything I could have dreamed.