13 Disney Dads And What Makes Them Great Fathers

13 Disney Dads And What Makes Them Great Fathers 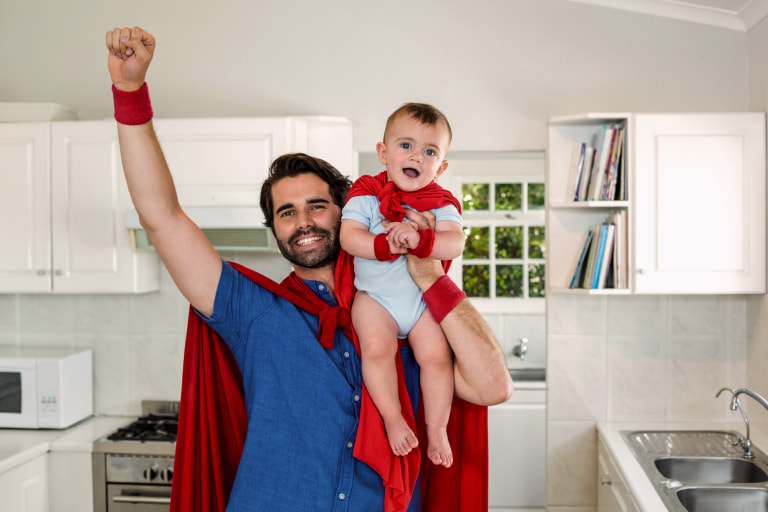 There is something especially sweet and heartwarming about watching a father care for his children. While we know mothers to be magical in their own right, fathers are pretty magical themselves. They can instantly ease our fears, and as little ones, they can lift us into the sky and make us fly. They have an ability to make us feel safe and their often easygoing nature helps remind us not to sweat the small stuff.

The fathers of Disney are no exception. Some of our most beloved Disney movies feature appearances from father figures, each of them playing a significant role in the lives of their children. Like many of the great fathers or father figures in our own lives, the dads of Disney are protectors, willing to give up anything for the good of their family. They look after their young, show them the ropes and impart lessons into their lives through their words, actions or both.

They’ve also got some of the biggest hearts. For some of them, their children were always theirs. For others, a child (or 3 or 84) came into their lives, tugged on their heartstrings, and became theirs in some way or another.

In celebration of Father’s Day, we are sharing 13 dads from Disney classics as well as the traits they possess that make them great fathers.

Bob Parr is brave, strong and heroic. Not only does he possess physical strength but inward strength as well. When his family is faced with a trial they get through it together. Mr. Incredible also has a desire to help others making him a great hero and father.

Mr. George Banks is known for being quite serious; however, he had a desire to become a better father and husband and made an effort to do so.

King Fergus acts as a peacemaker trying to help his wife to be able to better communicate with their daughter; he is a protector and a teacher. He also has quite a sense of humor; something that has probably helped him through various challenges that come from being a parent and a king.

Marlin is one determined and brave father. When Nemo goes missing, Marlin puts his fears aside and harnesses the courage to go out into the world and find his son.

Mufasa is courageous, loving and wise. Mufasa is the protector of his family and kingdom. He loved his son Simba so much that he was willing to risk his own life in order to save Simba’s. His wisdom served as a guiding light for Simba even long after he had gone.

Although he comes across as laid back Pongo is also very loyal to those that he loves. He is clever and resourceful, and uses these characteristics to help him and Purdita find their puppies and keep them safe. Pongo is also very loving, making the decision to adopt 84 puppies to love and care for in addition to their original 15.

Despite being strong willed, King Triton still has a gentle way about him. He is honest and open about his thoughts and despite his opinions being difficult to understand, at the focal point of each one is his desire to keep his family safe.

Although misunderstood by many of the townspeople, Maurice is a bright man. He is creative which serves him well as an inventor. He also seeks to be a provider for his family, hoping that his creation will lead to a new life for he and Belle.

Tiana’s father James was hardworking but he was also a dreamer. He valued family and instilled in Tiana the value of hard work. When he passed away Tiana continued to work hard in an effort to make her father’s dream a reality, which had now become her dream.

Carl possesses a willingness to change. Given his age it is understandable that he might be set in his ways; however, over time his stubborn demeanor fades and his heart opens up to receive the love of Russell, Kevin and Dug. He also knows that in the end it’s the people in your life that matter most. Carl loved his house but loved Russell, Kevin and Dug more. “It’s just a house.”

Thomas is the cool dad but he is also clever and nurturing. He becomes a caretaker to Dutchess’ babies, Marie, Berlioz, and Toulouse, opening his heart to receive all the love they have to give and giving it right back.

Tramp is laid back, smart and resourceful. These are all skills that helped him survive living on the streets and helped him to save Lady when she was in trouble. Tramp also has a soft side which became increasingly evident when he and Lady shared a spaghetti dinner.

Gepetto is a kind and devoted father who loves without measure. It didn’t matter to Gepetto if Pinocchio was a “real boy” because Pinocchio was his boy. And he loved him unconditionally. Gepetto understood that no matter what manner a child comes into our lives, their presence is a gift.