16 Real Moms Share How They Revealed The Big News

I'll never forget the moment that Larry found out I was pregnant... because he was right there next to me! Our pregnancy story isn't like a lot of folks', as I got pregnant after years of infertility and our first round of IVF. Since we didn't make our baby the old-fashioned way, we actually had to wait for a phone call from our fertility clinic with my beta test results, ten days after our IVF procedure. Those were easily the longest ten days of our lives! We were on strict instructions not to take a pregnancy test and as much as I wanted to, I didn't and waited for the call.

When our clinic called, I put my phone on speaker and our IVF coordinator simply said, "Keiko, you're pregnant! Congratulations!" My husband and I were looking right at each other when she said it, and I'll never forget the look of stunned surprise on my husband's face. We were so excited we both couldn't stop laughing and smiling. After I hung up, I turned to Larry and said: "NOW can I go buy a pregnancy test, please?!" True story: we walked to the pharmacy around the corner right then and there where I bought a whole handful of tests and peed on them all once I got back home!

Every pregnancy reveal story is always a little different, and it's always fun to share the news with others. But that first moment when you share your news with your partner stands out from all the other announcements. Here 15 more real moms share about how they told their spouses and partners they were pregnant! 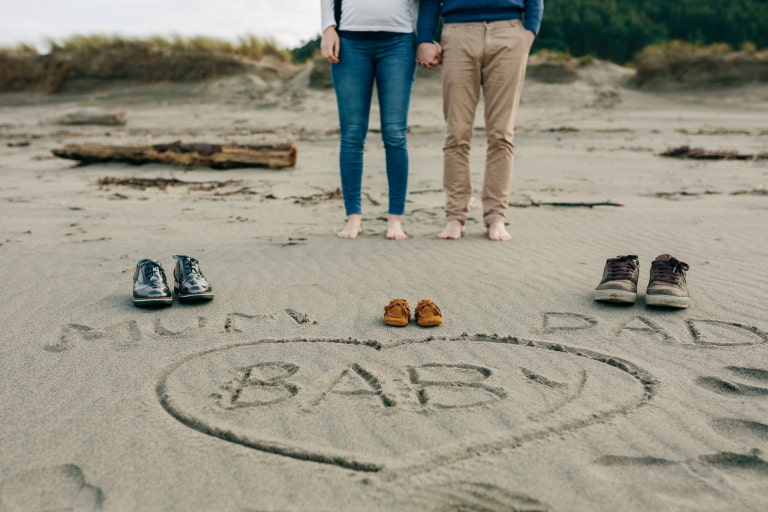 Once Upon a Dream

"One of my girlfriends texted me and told me she had a dream where I was pregnant. I just laughed it off but the more I thought about it, the more it made me want to take a test. Much to my surprise it was positive! I took a picture and called my husband, telling him I had something to tell him but he needed to sit and I would text him. The rest is history and our baby boy is due in May!" - Sara S.

"My husband was there through every moment of our 'we're pregnant' discovery. I peed on the pregnancy test, then left it to do it's thing. We went in together to look at the results. The line was so faint the first day that he thought it wasn't a positive result. It took about another three mornings of tests before we were both convinced that we were really pregnant." - Cait D.

"My husband was at his BACHELOR PARTY in New Orleans and I went to CVS and bought a pint of Chubby Hubby ice cream (projecting? Possibly.) and a box of pregnancy tests. I called him from the parking lot and made the announcement. He was actually super excited!" - Meredith B.

"During our honeymoon we heard that Carly Rae Jepsen song Call Me Maybe constantly. I found out I was pregnant shortly after we got home, so I waited a few days until his birthday and made him a card that said "Hey I just wed you and this is crazy, but Happy Birthday... we're having a baby!'" - Patrice G.

We're Both Going to Be Moms

"Given that we're both ladies, my wife and I did IUI treatments. We had gone through three cycles and were incredibly anxious. We went in for the third month and I remember having a really good feeling about it. We were both antsy the entire two-week wait. I kept thinking I felt a little different, but the fear of disappointment kept me from testing until exactly 14 days later. I woke up like a kid at Christmas at 4am that morning and nervously took the test... It was positive! I hadn't even thought to do something fun or cute to tell my wife, so I just ran back to our room grinning like an idiot and just said 'Yep, this is actually happening!'" - Pao M.

My Husband Told Me

"We did it together: I took the test and then we paced the living room for the longest three minutes of our lives. I made him look first!" - Samantha L.

"I ran downstairs while he was cooking breakfast and screamed that the pregnancy test was positive and we needed to run to the store and get more just to be sure! I ended up using eight tests. All eight pregnancy tests were positive within seconds!" - Kate M.

"I made dinner for him: meatloaf in the shape of a plus sign!" - Amy W.

"Had a cake made with pink and blue icing and little plastic babies wearing pink and blue. After dinner, I gave him the cake for dessert and he figured it out pretty quickly!" - Kristina E.

Hey Teacher, Are You Okay?

"I texted my husband right before homeroom (he's a teacher). The kids came in and were all concerned because he was pale, pale white. One of the kids ran and got the nurse!" - Lynne S.

"I just blurted it out in the middle of a movie we were watching! I was so nervous about his reaction that I had kept it from him for a few days. I took six tests before I decided to tell him, Funny thing is, we had decided to start trying so I don't know why I was so nervous!" - Tyra H.

An Out of Town Surprise

"My husband was out of town when I found out, so I took a picture of the million positive pregnancy tests and put it into a shadow box frame with little baby things and a sign that said, 'Soon to be Daddy!' I gave it to him the minute we got home saying, 'I have a present for you, it's not finished yet but I thought you might like to see it anyways.' When he saw it he just smiled, dumbstruck for a minute, before he began laughing and crying, finally asking, 'Is this for real?!'" - Charlotte A.

A Whole New Kind of Ride

"My husband rides motorcycles and it was about a week after we came back from a bike rally. I got him a motorcycle model kit and stuck the positive pregnancy test behind it. So when he opened it, he instantly knew!" -Stephanie J.

"I found out I was pregnant a few days before Valentine's Day. I got my husband a card from me and a kids' card addressed to daddy. We had been trying for months so he knew exactly what it meant!" - Vanessa A.